Strolling past windswept trees and approaching the white cottage and tower housing the Point Pinos Lighthouse near the southern entrance of Monterey Bay, you'll find no hint of its dramatic history. But after stepping inside the oldest, continually operating lighthouse on the West Coast—first lit in 1855—you'll learn about some of the fascinating women who once called it home. 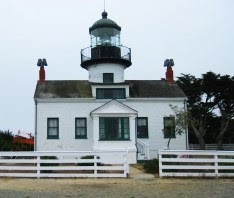 Charlotte Layton didn't set out to become a pioneering lighthouse keeper but she did so in 1856, after Anastacio Garcia shot and killed her husband Charles. As Point Pinos' first lighthouse keeper he also made up part of a Monterey County sheriff's posse pursuing Garcia. Layton suddenly found herself a widow with four children and no prospects. At the time, grizzly bears roamed the land and the area possessed a Wild West atmosphere. Layton became the first female lighthouse keeper and continued until 1860, when she married her assistant lighthouse keeper, George Harris, and they traded jobs.

Another woman, Emily Fish, the widow of doctor Melancthon W. Fish, took the reins of Point Pinos in 1893. Instead of inheriting the position because of her husband's death, she actually applied for the post, with the assistance of her naval officer son-in-law, who worked for the U.S. Lighthouse Board. Accompanied by her Chinese servant, she brought a sophisticated ambience to Point Pinos, decorating the living quarters with antiques, fine china and silver. Her fondness for entertaining garnered her the nickname the Socialite Keeper.

A self-guided tour of the lighthouse reveals the 19th century parlor containing chairs topped with needlepoint cushions, an ornately carved piano, a fireplace and floral curtains. It's easy to imagine Fish hosting a graceful evening here for guests including artists, writers and naval officers. From 1893 to 1914, she kept meticulous logs, which visitors can view today. One of her most compelling set of entries documents the 1906 earthquake, which damaged the lighthouse tower.


Fish beautified the sandy grounds surrounding the lighthouse by covering the area with topsoil and planting trees, grass and other vegetation. She also ventured into farming and kept an array of animals, from French poodles to Holstein cows. Today, some of the landscaping remains but it's difficult to find traces of the farm.

Back on the tour, the kitchen displays historical exhibits and books. A cellar features stations demonstrating how the light works at Point Pinos and who invented it. Maritime fans will delight in learning the workings of the third-order Fresnel lens, which consists of prisms, lenses and a mechanism. Made in France and shipped around Cape Horn, its beehive arrangements of glass prisms gathers the light and directs it out to the ocean.

Invented by French physicist Augustin-Jean Fresnel, the design allows more light to shine through, enabling ships to see the lighthouse from several miles away. Originally lit by a lantern fueled by whale oil, the light was regularly blocked by a falling weight mechanism that moved a metal shutter around it. It would eclipse the light for 10 seconds and then the light would shine for 20 seconds. By creating this distinct signature, a ship's crew would recognize the location.

Point Pinos Lighthouse offers a wonderful glimpse into 19th century California maritime history. Allow an hour to take the self-guided tour, chat with the docents and browse the books for sale. Outside, settle in on one of two wooden benches and gaze at the expansive vistas of the sea. No need to worry about grizzly bears.