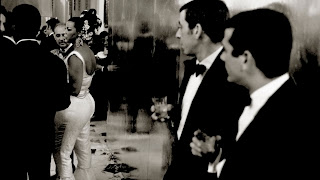 Peter Solmssen captured this intriguing black-and-white image of two tuxedoed men eyeing a woman in 1960s Brazil. His works are on view at 111 Minna Gallery in San Francisco. Photos courtesy of the artist.

One day in Singapore in 1961, American diplomat Peter Solmssen heard an alluring song playing inside a record store. Curious, he stopped by and upon learning its title and composer - "Corcovado" by Antonio Carlos Jobim - he discovered bossa nova and one of the founders of this seductive style of Brazilian music. Solmssen decided that his next assignment for the State Department would have to be in Brazil.


Leaving New York in 1965 on board the liner Brazil, bound for the U.S. Embassy in Rio de Janeiro, he met a fellow passenger on the ship: Jobim.
"My grandfather and father both spent significant time in Brazil, but that had nothing to do with my going there. It was the music and, with my luck, it was in full flower at the time," Solmssen says. "It was of professional interest as well, since this music was actually the result of cultural exchange: Africa with Brazil, Africa with U.S. jazz, U.S. jazz with Brazilian samba, etc."
The diplomat and the prominent singer, songwriter and composer - who co-wrote "The Girl From Ipanema" - became friends. And Solmssen, a former photographer for Life magazine, documented the people, culture and characteristics of Rio de Janeiro, São Paulo and Salvador during this time through his photography and films. His solo exhibition at 111 Minna Gallery, "Brazil in the Sixties," encapsulates five years through 25 photographs, as well as two films.
With his Konica Auto-Reflex camera and using Kodachrome, Ilford HP4 and Kodak Tri-X film, he set out to portray the nature of each place.
"I photographed Rio to record the beauty of the place and of the people. The Brazilians on the beach in Ipanema were so elegant that the picture in the show could have been taken yesterday" until you notice the very dated Americans way in the background, Solmssen says. "Rio is a riot of color; photographing it in black and white would have been a distortion of the amazing reality." 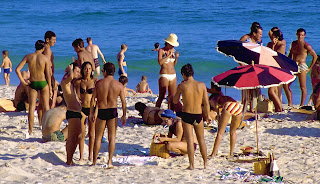 In one such work, a plane flies above Guanabara Bay, awash in soft, natural light, silhouetted by Rio de Janeiro and the 2,300-foot Corcovado mountain. Another captures the lively beach scene, with two young women wearing bikinis against a backdrop of turquoise water. 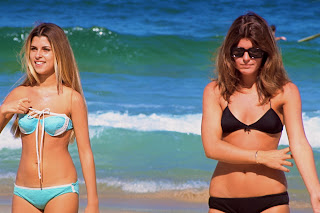 "São Paulo is higher, cooler and grittier. It feels more like Europe and has a heavily European population; moving there felt like going to another country, though it is only 200 miles away," he says. "Black-and-white seemed the obvious choice. I started to photograph what I saw for a book, because it is a major industrial center and at the time most people outside of Brazil had either never heard of it or thought it was in the jungle somewhere."
Among these works is an intriguing shot of two tuxedoed men at a party eyeing a woman with an ornate hairstyle, dramatic makeup and a tight pantsuit. In another work, a street bustles with throngs of people making their way across a section of a busy thoroughfare, crowded with clusters of VW beetles, all headed toward a chaotic traffic jam. 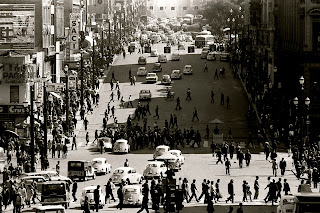 "The mere personal experience and history behind the idea and Peter himself were a unique opportunity for the gallery to collaborate with an artist who was offering an exhibit outside of 111 Minna's usual format, but still carried with it an attitude which we admire," curator Micah LeBrun says. "It possessed an honest documentation of an edgy and progressive culture, which was developing during one of the edgiest decades the world has known ... the '60s."
Through Jan. 28. Noon-5 p.m. Wed.-Fri. 111 Minna Gallery, 111 Minna St., S.F. (415) 974-1718. www.111minnagallery.com.
Posted by Stephanie Wright Hession at 11:52:00 AM No comments: