"Habitat" engages and thrills with grace, strength and skill

Audience members ambled up a creaky set of wooden stairs, its banisters wrapped in vivid blue tulle, to the second floor Dance Mission Theater in San Francisco. They appeared eager to attend the December 14 opening of Sweet Can Productions' "Habitat," a mixture of circus arts, dancing and theater, written and directed by Rob Rodgers.

Inside the petite theater's ebony walls and on an uncomplicated set with props such as a free standing door on wheels and a step ladder, Rodgers presented a series of vignettes dealing with the themes of public and private personas. He demonstrated how each character possessed one face for others and another for the privacy of his or her abode. He also addressed the longing for personal connections and the process of letter writing with all the emotions that come with it, as mailboxes levitated and massive envelopes appeared on the stage.

A particularly flirtatious scene featured all six characters waiting for a bus, as each one tumbled, twirled and danced from a bench, backgrounded by gypsy style music that reached a manic level. Each also mirrored one another's movements in a delightful way, including crossing legs in unison. Choreography by Kresinski, Clarke, Sheets and Natasha Kaluza added richness to this scene and others in "Habitat."

Each member of the cast captivated both the adults and the younger set in the audience and brought the production wonderfully to life.

Acrobat Matthew White demonstrated his comedic skills, amazing strength and balance when he played a man surrounded by two beige and ivory striped walls and a floating window. Each time he hung his sweater up it fell down, with it eventually becoming absorbed into the wall. Suddenly, White flipped and spun off the walls. Then he crawled up the walls and topped each with a dramatic handstand.

Kerri Kresinski exhibited grace and fortitude during her solo performance on pale blue, aerial silks. In moves that included dangling upside down by her wrapped feet and dramatically whirling from the ceiling to the floor, with the silks wrapped only around her waist, she thrilled the audience.

Beth Clarke demonstrated her physical agility as the woman who attempted to retrieve a letter-only to end up bent in half inside a large, metal garbage can with her head and feet poking out. She also executed a superb routine on the slack rope. And she and White were touching and romantic when they paired on the aerial silks for a supple and sensual performance.

When Daniela Steiner spun in the darkened theater from the trapeze she proved truly stunning and exhibited a powerful command over her body, which looks like a fine sculpture.

Jeremy Sheets’ balletic performance on the German wheel was both poetic and fluid. He was also charming and endearingly funny in several other scenes.

Juggler Beejay Joyer portrayed an overly confident juggler with wonderful comedic timing as he kept a trio of white orbs airborne behind his back, making them seem weightless.

It all made for a refreshing and alluring evening of theater.

What happens when a highly imaginative playwright places Sigmund Freud, Salvador Dali and a deeply distressed female stranger together on a rainy London night? “Hysteria,” an engaging and disturbing tale by British playwright Terry Johnson. Berkeley’s Aurora Theatre’s 16th season opener, directed by Joy Carlin, "Hysteria" initially feels like a typical British farce but soon morphs into something much darker and more complex.

Set in 1938 England, the tale begins one late evening in Freud’s (Warren David Keith), Hampstead study, which set designer Richard C. Ortenblad Jr. creates with French glass doors looking out on to a garden, a trio of glowing, dangling etched lights and a plain white wall adorned with a clock and a work by Pablo Picasso. On stage a wooden desk, covered with international antiquities such as an obelisk and a goddess, sits near a plum-hued velvet chair, a chaise covered with Persian rugs and a petite table topped with a chess set, making it all believable as Freud’s office.

Freud, who fled Vienna to escape the wrath of the Nazis, is now dying of inoperable jaw cancer and coping with the increasingly difficult levels of pain with shots of morphine administered by his doctor, Abraham Yahuda (Charles Dean). Despite the grim circumstance, the witty quips between Freud and Yahuda emit generous amounts of laughter from the audience. But the feel of the play quickly changes with the rumble of thunder and the unexpected appearance of Jessica (Nancy Carlin), a young woman who frantically wraps at Freud’s front door.

At first she claims to be a woman suffering from anorexia and a psychosomatic disorder of having three of her fingers stuck together. Freud, old and ailing, possesses no interest in helping her and tries to get rid of her with a referral to another psychiatrist. But the woman will have none of it and soon Freud realizes that she’s imitating a hysteria case study he published thirty years before. Jessica then fesses up to being a student whose thesis revolves around this particular case, saying she’s seeking further insight from Freud. However, she still isn't being truthful and in fact holds dark secrets which she reveals to Freud.

Just when the circumstances become heavier and more unsettling, Surrealist artist Salvador Dali (Howard Swain) arrives for a scheduled visit with Freud, elevating the mood and amping the pace to madcap levels. It’s fascinating to observe how Dali reacts to Freud and Jessica’s interactions and revelations—some touching and others dealing with horrific events of the past. The intensity of one particular scene feels that much more eerie, thanks to the special effects of melting clocks and walls.

Powerful vocals, delightful dancing and a melancholy ambiance makes “Blues in the Night” an engrossing production”

Rejection by their men, the longing for dreams unfulfilled and the sweet memories of good times past-and the residual loneliness of it all-give the three women in “Blues in the Night” reason to convey their yearnings through a series of melancholy tunes in this emotionally rich musical. Conceived and directed by Sheldon Epps, with musical direction by Rahn Coleman and choreography by Kenneth Lee Roberson, the production opened last Wednesday at the Post Street Theatre in San Francisco.

Cast members Freda Payne, Carol Woods, Paulette Ivory and Maurice Hines soulfully bring to life blues classics by Bessie Smith, Duke Ellington, Benny Goodman, Johnny Mercer and more, that people have sung for decades. However, the songs endure thanks to their poignant themes and remain fresh, thanks to the brilliant vocal skills of Payne, Woods and Ivory, as well as the charismatic performance of singer and hoofer Hines, who plays the hotel’s saloon singer and the production’s narrator. 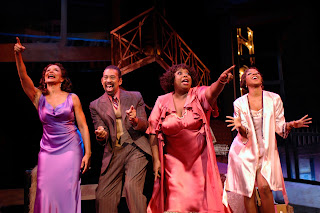 It all take place in a shoddy Chicago hotel in the late 1930s, on scenery and lighting designer Douglas D. Smith’s morose set with its slanted, off kilter windows, a hotel sign illuminated with dotted white lights against a city skyline awash in plum, lavender and gray hues with a deep midnight blue sky. On stage he furnishes the women’s three rooms with vanity tables topped with perfume bottles, a large traveling trunk adorned with destination stickers and bedding made with ruby and gold fabrics.

Each of the women living there represents different phases in life. Paulette Ivory as the young, optimistic The Girl with a Date, embodies hope and new beginnings. The mature, wiser The Woman of the World illustrates the savvy gained from life experience. And The Lady from the Road, the maternal figure who comforts the other two women, lives in the safety and shelter of a world she's created with memento filled scrapbooks of her singing days and her former lovers. She also keeps her past alive by wearing outlandish costumes she once donned on stage, now stowed in her traveling trunk.

Each number in “Blues in the Night” serves as a vignette to reveal another aspect to one of the characters, whether it's dealing with a current disappointment or an emotional scar caused by hurts of long ago. Some songs are deeply moving while others are light and a bit naughty.

“Blues in the Night” begins full force and gets the audience members' feet tapping with a wonderful company rendition of “Blue Blues.” The energy continues when Woods sings “New Orleans Hop Scop Blues,” especially humorous because she wears an orange, fringy, flapper dress with a funky, matching hat. Alternatively, she enthralls the audience with her heart wrenching performance of “Wasted Life Blues.” Woods possesses that marvelous mix of a gorgeous voice and comedic talent. Her performance of “Lover Man” also proves outstanding.

The elegant Payne demonstrates her beautiful voice in “Stompin’ at the Savoy,” complete with a sensual dance under a shimmery disco ball spinning from the ceiling. And she scats during this number too, much to the thrill of theatergoers. Her voice is also deeply stirring when she sings “Lush Life.”

Ivory superbly conveys the anguish her character is experiencing with her haunting performance of “Willow Weep for Me.”

Hines is utterly charming as he sings and dances his way through “I’m Just a Lucky So-and-So” and it’s exciting to watch him tap across the stage, displaying his amazing talent.

“It Makes My Love Come Down” demonstrates the beautiful harmony between Payne, Woods and Ivory, when the three women give a potent performance of this sassy and juicy number. Ivory and Payne also sing a moving duet of “When Your Lover Has Gone.”

Overall, “Blues in the Night” offers a delightful opportunity to enjoy a superb evening of the blues performed by exquisite performers and should not be missed.

“Blues in the Night” plays Tuesdays through Sundays, through October 28 at the Post Street Theatre, 450 Post Street, San Francisco. Tickets range from $40 to $75. For tickets call (415) 771-6900 or visit www.ticketmaster.com. For more information go to www.bluesinthenightsf.com or visit www.poststreettheatre.com.
Posted by Stephanie Wright Hession at 7:51:00 PM No comments: