Lamplighters create magic with its production of Gilbert and Sullivan's "The Witch's Curse: Ruddygore"

Set in the early 19th century in the seaside village of Rederring on England's Cornish coast, the tale centers on Rose Maybud (Elena Sophia Krell), a naive and proper maiden and her timorous admirer, gentleman farmer Robin Oakapple (F. Lawrence Ewing). It all takes place on scenic designer Peter Crompton's set with its trio of massive, lovely vintage style postcards featuring a lighthouse, a tall ship, a castle, roses, cliffs and the seashore along with the slogan "Greetings from Scenic Rederring 'Wedding Capitol of Lower Cornwall.'" 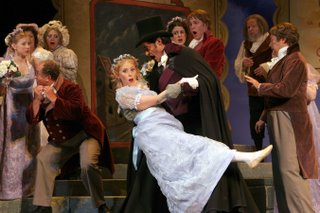 But the audience learns there's a much darker aspect to the saga during the number "Sir Rupert Murgatroyd," sung splendidly by Katy Daniel as Rose's guardian Dame Hannah, accompanied by the female chorus.

An endearing scene between Rose and Robin occurs after the two shyly encounter one another on a village street and awkwardly attempt to express the affection they feel toward each other during their sweet duet "I Know a Youth."

Things get complicated with the arrival of sailor Richard Dauntless (John Brown), who comes to town after years at sea. He quickly charms the professional bridesmaids-needed with so many couples coming to Rederring to be married-with the appealing number "From the Briny Sea." He also engages the bridesmaids in a mirthful dance and soon has them pulling from either end of a large rope in an impromptu game of tug of war.

Robin turns to the boisterous Richard to represent him in his bid for Rose's hand in marriage, never expecting that he would also fall in love with her. Richard overtly declares his affection for Rose with several kisses during the humorous and flirtatious number "The Battle's Roar is over." Now, Rose must decide between the introverted, wealthy gentleman who offers her an upper crust life or the fun, vivacious sailor with neither title nor money.

Robin adds intrigue to the plot by hiding his true identity. He's actually Sir Ruthven Murgatroyd, a long line of cursed baronets who must commit a daily crime or die an agonizing death. It all stems from a dead ancestor Sir Roderic Murgatroyd (played wonderfully by Behrend J. Eilers) who ordered a witch burned at the stake. Before she died she cursed him and his descendents. In an attempt to flee his fate, Robin forged his death and left his younger brother, Sir Despard Murgatroyd of Ruddygore (Charles Martin), to assume his role. Faithful servant Old Adam, played charmingly by William Neil, accompanies Robin into his new life.

Enter Mad Margaret, the former love of Sir Despard Murgatroyd and one of the most intriguing characters. Covered with mud, wearing ragged clothing and clearly insane, she's touchingly portrayed by Kathleen Moss who sings the poignant number "Cheerily Carols the Lark."

More mayhem ensues when the younger Murgatroyd appears in town searching for his brother. With his dark, good looks and the graceful swirl of his black cape, Martin gives a delicious performance as the villainous baronet, terrifying the bridesmaids during the number "Oh, Why am I Moody and Sad?"

What will become of them all? Only the unraveling of this melodramatic mystery will tell.

Judy Jackson Macllvaine beautiful costumes give "The Witch's Curse: Ruddygore" its rich, Victorian feel. Her elegant ensemble for Sir Despard Murgatroyd, with its rich cape and deep purple vest add to the foreboding persona of this character. Conversely, Rose Maybud's pink and white lace frock conveys her innocence. The lovely bridesmaids' dresses in lavender and pale blue with empire waists, sheer lace overlays and accompanying floral crowns also harken back to the era.