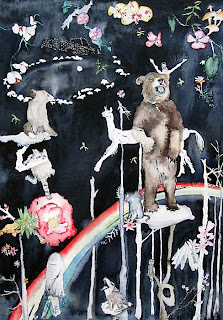 Raised in Montreal, Rosemary Scanlon now makes her home in Canada's Yukon Territory, which influences the ethereal images of owls, raccoons, unicorns and the boreal forest that appear in her paintings.
"When I first started coming up to the Yukon, life up here was so surreal. It was so magical and strange - the atmosphere, the crisp quietness of when it gets really cold and really dark, the lynx slinking across the road ahead of you, wild adventures in pickup trucks, the things that go on under the midnight sun," she says. "My experiences here had a huge influence on my artwork and me. I like to attempt to locate that feeling of tension between the fantasy and reality of northern life."
Six of her watercolors will be part of "Land of Magic: Artists Explore Make Believe," a group show that explores desire, escape and reverie. Working with media ranging from printmaking to painting to photography to video installation, the 13 artists' imaginary settings possess distinctive characteristics and feature astronauts, pink trees, mystical creatures and castles, assembled from childhood memories and thoughts on the future.
In "Looking Glass," one of Scanlon's works in the show, a statue of Jesus juts from the head of a grizzly bear standing against a midnight blue background. Stems of flowers seem to dance about a large rainbow, intermingled with trees and plant stalks.
" 'Looking Glass' is probably the most playful of them all. ... I really just wanted to play with the different flora and fauna of the Yukon," Scanlon says. "All the animals in the painting are painted from images of taxidermy. Some of the flowers are fake or genetically modified. I was interested in fake and real representations of nature."
She also enjoys adding strange and random aspects, like the statue, which happened to be in the photograph of the taxidermy bear she painted from. She draws from northern folklore, First Nations storytelling and tales of the Yukon Gold Rush.
"I work intuitively, though to some extent there is an ever-present dialogue or narrative of place that occurs wherever you live, and that greatly informs my work. When an idea or image pops into my head, I write or sketch it down," she explains. "I then research these ideas, draw ideas from that research - which may in turn lead to other research. I also take a lot of photographs. I carry a camera with me to record interesting scenes or things that I come across."
Sun.-June 12. Noon-5 p.m. Tues.-Sun., 6-8 p.m. during performances. $3-$5 (free 12 and younger and first Tues.). Bedford Gallery, 1601 Civic Drive, Walnut Creek. (925) 295-1417. www.bedfordgallery.org.
Posted by Stephanie Wright Hession at 11:37:00 AM