"Aurora Theatre produces 'The Eccentricities of a Nightingale,' one of Tennessee Williams' lesser-known plays." 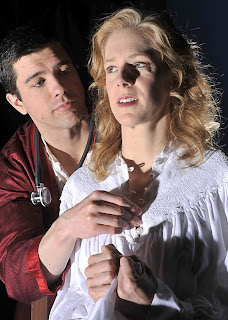 ﻿
By Stephanie Wright Hession
Arts and Culture Writer
Tennessee Williams spent decades retooling "The Eccentricities of a Nightingale," including revising the piece for 25 years before it opened on Broadway in 1976.
"Eccentricities" is one of Williams' lesser-known plays, but he's said to have identified with its main character - Alma Winemiller - more than any other he created.
Winemiller lives in pre-World War I Mississippi, and she's a spirited and creative woman who's called the "nightingale of the Delta" for her musical ability. She lives among people in a place and time that reject her nonconformist ways.
"I found 'Eccentricities' to be very moving," said Tom Ross, artistic director of the Aurora Theatre Company, which is staging the play as part of the celebration of Williams' 100th birthday.
"Tennessee said he could relate to Alma because it took her a long time to come out, as it did with him," Ross added. "She is definitely on a sexual journey in a repressive environment. Tennessee Williams writes from the vantage point of the universal heart and the mind."
San Francisco actress Beth Wilmurt, who portrays Winemiller, said that the 35-year-old play has not lost any of its appeal with age.
"The play has many relatable themes," she says. "Marginalization and repression of those who are different is certainly an obvious theme, and even though times have changed, still relevant.
"But there are other interesting ones that stand out to me," she adds. "What makes up our fantasy lives or what are our illusions that keep us going and able to cope with life, getting out from under society's judgments and the hold our parents have on us; the repercussions of honesty - of ourselves and others - and our judgment of that; and sexually forward woman and the judgments that brings on."
Ross says those ideas of self-reflection and self-understanding help with the show's appeal to a contemporary audience.
Williams' "themes and characters are timeless and wholly human," Ross says. "This is a play about a human being who comes to an understanding of who she is and who she really wants to be. The play follows her as she attempts to find true satisfaction in life. We all want that."
8 p.m. Fri.-Sat., 2 p.m. Sun. Previews through Wed.; opens next Thurs. $10-$55. Aurora Theatre, 2081 Addison St., Berkeley. (510) 843-4822. www.auroratheatre.org.
Posted by Stephanie Wright Hession at 11:35:00 AM