A colliding of cultures, a test of wills, the challenge of learning to embrace people very different from yourself and the darker issue of human slavery are the enduring themes in Rodgers and Hammerstein’s “The King and I,” which continues to resonate strongly with audiences nearly 60 years after it first debuted on a Broadway stage.

Broadway by the Bay is currently bringing this classic musical to life with lush vocals, beautiful orchestration, delightful dancing and exquisite costumes in its current production directed by Dennis Lickteig, with choreography by Jayne Zaban and musical direction by Mark Hanson, which opened on July 16 at the San Mateo Performing Arts Center.

Based upon the book “Anna and the King of Siam” by Margaret Landon, it tells the true account of a fiercely independent, widowed English schoolteacher Anna Leonowens, (portrayed superbly by Susan Himes Powers), who arrives in 1862 Bangkok with her young son Louis, (played sweetly by Hunter Lowdon), to tutor the King of Siam’s numerous children and wives.

In the opening scene Anna and her son make the transition from the familiar to the foreign when they disembark from the ship Chow Phya, with its wary English Captain Orton (John Duggan), and enter the mysterious Bangkok. Trouble immediately ensues when Anna discovers she and Louis will live in the royal palace despite the King's (Jared Lee) promise that they would live in their own home outside the palace walls. Her lack of familiarity with the city, and the new culture in which she now lives, doesn’t prevent Anna from immediately asserting herself and demanding a ten minute meeting with the king—in a land where this is simply not done. It all occurs on an exotic set designed by Premier Sets that features a pair of stone gates adorned with carved faces, back dropped by the ornate skyline of Bangkok and a crimson sunset.

Two poignant numbers convey the tragic aspect of this story. The first is when Meryll Locquiao, as Tuptim the enslaved and secret lover of Lun Tha (Romar De Claro), sings “My Lord and Master" which exhibits her gorgeous, haunting voice. The other is Himes Powers’ performance of “Hello, Young Lovers,” whose lovely voice produces chills.

There are also lighter and endearing moments as well, such as when the royal children meet Anna during the number “March of the Siamese Children” and one of them curiously lifts Anna’s hooped skirt—much to the dismay of the King,(portrayed brilliantly by Lee). It also gives the audience the chance to spy the array of costumes provided by The Theatre Company and created with sumptuous fabrics in vivid hues such as fuchsia, violet, deep green and accented with luxurious brocades. 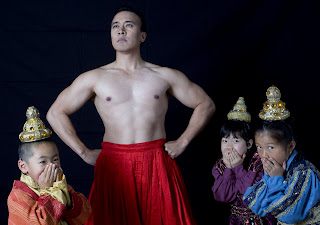 Other playful numbers include “A Puzzlement” sung by Lee, who gives a charismatic and commanding performance as the powerful, macho and domineering—yet secretly insecure—King. Other charmers include “Getting to Know You” sung by Himes Powers, Lowdon, the Royal Children and the Royal Wives,(played by the ensemble cast), and when Anna (Himes Powers) takes the King (Lee) for an effervescent whirl during “Shall We Dance.” 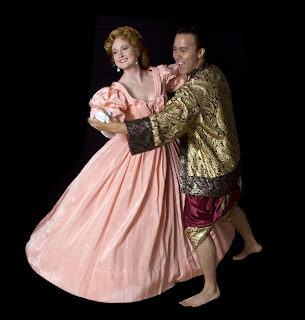 By far one of the most deeply moving scenes happens during the number “We Kiss in a Shadow” as Tuptim, (portrayed eloquently by Locquiao), and Lun Tha, (played tenderly by De Claro), gently face and caress each other while dreaming and longing for a life of freedom together.

Zaban's choreography adds a powerful element to the production’s most intense scene, a Siamese version of Harriet Beecher Stowe’s novel “Uncle Tom’s Cabin,” and the number “The Small House of Uncle Thomas.” The tension is palatable as the master Simon, (interpreted splendidly by Erin McKevitt), uses a pack of menacing dogs to hunt his slave Eliza, (interpreted gracefully by Yoshi Humfeld). Throughout the chase a female chorus chants “run, Eliza, run,” as the the scene builds to a crescendo. The choreography between Eliza and the Angel, (interpreted enchantingly by Joshua Lau), enriches it further and the masks worn by the characters add to the eerie nature of it all.

Overall, Broadway by the Bay’s production of “The King and I” provides an engaging evening of musical theater.